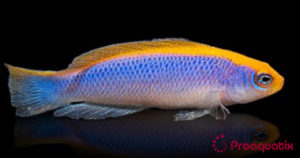 Description:
A powder blue-colored Dottyback with a yellow stripe that runs along the dorsal head and body and continues to the caudal fin.

Natural Ecology:
Pseudochromis flavivertex is a carnivore of worms and other small invertebrates. This species is often found in groups.

Indigenous To:
Red Sea and the Gulf of Aden.

Compatibility:
Usually ignores corals and most invertebrates. They may attack small shrimps but are useful to curb the proliferation of bristle worms.