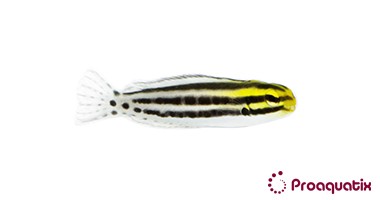 Description:
This species bears alternating black and white longitudinal stripes, with the white stripes increasingly blending into yellow pigments towards the head. Striped Blennies have a less pronounced lyretail.

Natural Ecology:
Meiacanthus grammistes is a carnivore of zooplankton and other bite-size invertebrates. Like most members of this genus, they have evolved a stinging bite for protection against predators. They have also evolved bright colors as an effective reminder to predators, who distinctly associate this species with a stinging experience. Interestingly, other non-venomous species have evolved to look like some Meiacanthus species in color and shape, so that predators also avoid them. This species is mimicked by Petroscirtes breviceps.

Indigenous To:
These blennies are widely distributed in the Pacific. Its natural range spans from Indo-China eastward to Papua New Guinea, northward to Southern Japan’s Ryukyu Islands, southward to Northwest Australia and the Great Barrier Reef.