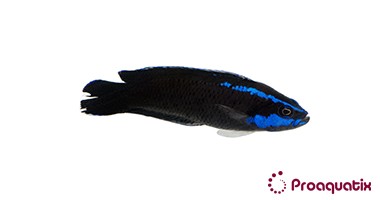 Description:
A black-colored Dottyback with two blue stripes running across the head.

Natural Ecology:
Pseudochromis springeri is a carnivore of worms and other small invertebrates.

Indigenous To:
Red Sea and Gulf of Aden.