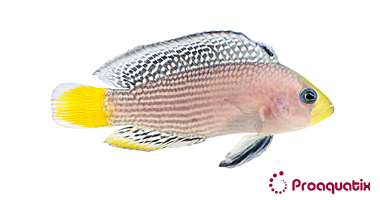 Description:
A blue-colored Dottyback with numerous yellow dotted lines running longitudinally through the body. A black stripe is sometimes seen running through the operculum. The caudal fin is yellow.

Natural Ecology:
Manonicthys splendens is a carnivore of worms and other small invertebrates.

Indigenous To:
Range extends from Flores, Moluccas, and Irian-Java southward to northwest Australia.

Behavior:
This species is aggressive towards conspecifics and other species within their territory.