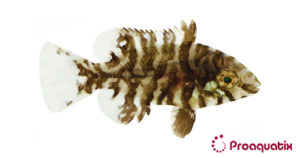 Description:
Juvenile and female Rooster Hogfish are either mottled brown, reddish brown, or pale gray. Males have a dark band running from the snout to the first dorsal spine and a black spot located near the posterior base of the soft dorsal fin. Adults have a pronounced arched dorsal profile and filamentous dorsal spines.

Natural Ecology:
Rooster Hogfish have been spotted over open bottoms, on coral reefs, or where gorgonians are abundant. Juveniles are frequently found on sea grass beds in Florida Bay. They are carnivorous and will feed on mollusks, crabs, and sea urchins.

Behavior:
Rooster Hogfish are found in harems, where one male will mate with and protect a group of females. They are protogynous hermaphrodites; juveniles start out as female and mature to become male.

Compatibility:
Usually ignores corals but will eat invertebrates. These fish grow large – up to 91 cm (36 in).