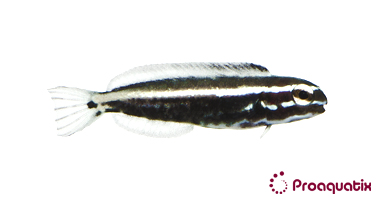 Description:
The Kamohara Blenny has an inky black body with a prominent horizontal, metallic white line that stretches from the eye to the caudal peduncle with random white speckles on the face. Juveniles will have more metallic white stripes, bands, and scribbling that will dissipate as they mature.

Natural Ecology:
Meiacanthus kamoharai is a carnivore of zooplankton and other bite-size invertebrates. Like most members of this genus, they have evolved a stinging bite for protection against predators. They have also evolved bright colors as an effective reminder to predators, who distinctly associate this species with a stinging experience

Behavior:This species ignores other species. They are often present in mid-water, hovering near its favorite rock crevice.