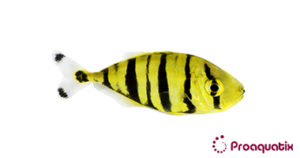 Description:
As a juvenile, the Golden Trevally have a bright yellow body with very distinguished black stripes. As they grow to maturity the yellow will fade into a golden/silvery color. As adults, they can grow in length up to 4ft.

Indigenous to:
Found in tropical and subtropical waters of the Indian and Pacific Ocean, mainly in sandy and reef substrates.

Behavior:
The Golden Trevally will school as juveniles and follow a pilot fish behavior by often trailing larger animals such as sharks.

Compatibility:
Usually ignores corals but will eat fishes and other invertebrates. These fish grow large – up to 120 cm (47 in).