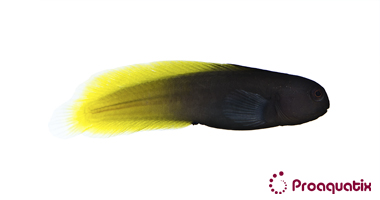 Natural Ecology:
Adults inhabit shallow coral reefs. They are frequently found perching on rocks near the bottom of its habitat, while occasionally moving higher up on the reef to graze on algal films and filamentous algae.

Behavior:
The Flametail Blenny is generally peaceful towards other tank mates, but they may pick on other blennies, small gobies, or dartfish.