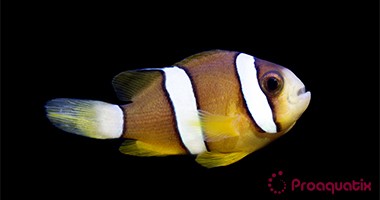 Description:
Numerous variations are found in wild Amphiprion clarkii, probably due to some degree of reproductive isolation of certain populations throughout its wide geographical distribution. Variation exists with respect to any combination of three characters—body color, caudal fin color, and the number of stripes. Body color includes yellow, tan, and black. Caudal fins can be white or yellow. The number of stripes varies from 2 to 3, while stripes may sometimes be inconspicuous.

Indigenous To:
Range extends from the Arabian Gulf to Fiji, as far north as Japan, as far south as Maldives, and as far west as Australia’s Great Barrier Reef and New Caledonia.

Behavior:
Like all clownfishes, Amphiprion clarkii is a sequential hermaphrodite. The largest individual present will exert dominance and become reproductively female. The next largest fish will become reproductively male. Anecdotal aquarium literature suggests that the female Amphiprion clarkii is sometimes unable to inhibit the male-to-female sex change of the male within a colony, leading to multiple female colonies.