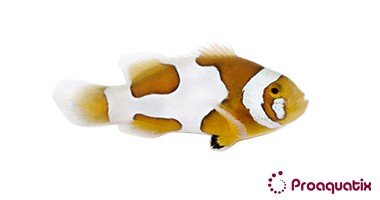 Description:
An orange-colored clownfish with three white stripes. Black margins are found on the edges of all fins and the borders of the white stripes. Like the Picassos, Premium Picassos have exaggerated barring, but our Premiums have enough white barring so the second and third bars are merged on BOTH sides of the fish. The Cheekspot Premium Picasso additionally has a cheek mark on one or both sides of its face, separate from the first white stripe.

Natural Ecology:
This variant of Percula is only rarely found in the wild.