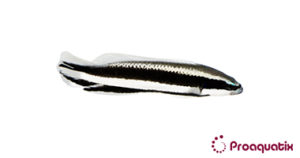 Natural Ecology:
Pseudochromis sankeyi is a carnivore of worms and other small invertebrates.